LOTS-India participated as a lead executor in the salvage operation involving the below-mentioned companies for their vertical expertise :-

M.T. NU SHI NALINI (the Vessel), owned by Arya Ship Charterers Private Limited and managed by Elektrans Shipping Private Limited, is a double-hull oil & chemical tanker, built in 2012 by Jiangsu Longhai Shipbuilding Company Limited in Jiangsu, China. She is constructed with six (6) pairs of cargo tanks, port/starboard, and two (2) slop tanks port/starboard, all forward of the accommodation and engine room. Beneath the cargo tanks are six (6) pairs of double-bottom water ballast tanks and one forepeak tank.The Vessel is equipped to carry 190 TEU on deck.The vessel has a flush main deck with a raised forecastle forward and a raised poop deck aft.The heavy fuel tanks and diesel oil tanks are located in the engine room. There are also several other smaller tanks containing lubricating oils, waste oil or oily bilge water located in the engine room.Propulsive power is provided by a single STX 6S35MC-MK7 main engine, coupled to a fixed pitch propeller.

At the time of the incident, the Vessel was carrying approximately 2,488 tons of Naphtha from Karachi, Pakistan, bound for the port of Budge Budge, India. A total of 10,699.74 MT of Naphtha had been shipped on board the Vessel in Karachi, Pakistan under four (4) bills of lading dated 5th June 2018.Prior to the Incident, it was reported that there was a balance of about 2,488.707 MT of cargo remaining on board after the Vessel departed from her last discharge port of Mundra, India on 8th June 2018. On 13th June 2018, whilst at anchor off Kochi, India, an explosion occurred on board the Vessel. A fire, which extinguished quickly, broke out in the engine room, following the explosion.

A Lloyd's Open Form 2011 Salvage Agreement ("LOF") was signed between the Owners of the Vessel and Resolve Salvage & Fire ("RESOLVE") on 13th June 2018 with the SCOPIC Clause incorporated. Tugs and equipment were mobilized to the site of the incident and the crew were evacuated from the Vessel on 15th June 2018.The SCOPIC Clause was invoked on 17th June 2018 and the Vessel's P&I insurers, Navigators Protection & Indemnity, provided the initial SCOPIC security of USD 3 million in the form of a LoU on 19th June 2018.All requests to seek shelter or enter any Indian port to undertake the salvage operation were rejected. The plan has since been to tow the vessel to Trincomalee, Sri Lanka, where a permit had been obtained.However, due to a dispute concerning the provision of additional SCOPIC security, RESOLVE served a notice of termination of the LOF/SCOPIC on Owners on 22nd July 2018, eventually paving the way for LOTS-Singapore to step in and commence / complete the salvage operations thru LOTS-India.

When LOTS-India commenced work on the contract, though the vessel was stable she was in 'blackout' condition with no power on board. The scope of work of LOTS under the salvage contract comprised : 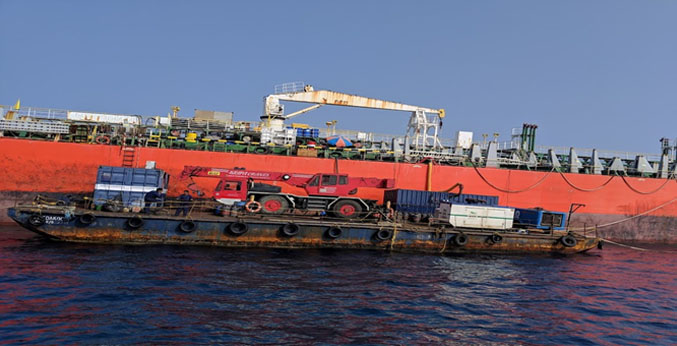 LOTS-INDIA'S MEN AT WORK, ON SALVAGE OPERATIONS, ON BOARD M.T. NU SHI NALINI

However, towards the completion stages of the salvage jobs in June 2019 and immediately thereafter, the project unfortunately encountered litigation by a couple of sub-contractors / interested parties, at the end of which the vessel was allowed by the Hon'ble High Court of Kerala to be moved out of the Kerala coast, whereupon she was arranged to be towed to Goa. She, however, got grounded off Goa coast and re-floatation of the Vessel posed a new challenge before the unloading / transfer of Naptha off the tanks on board could commence.

LOTS-India proudly proved it once again,by partnering with Marine Masters B.V. ("MMBV"),The Netherlands, lending its equipment, material and skilled crew & manpower for inerting and gas-freeing the tanks & spaces of the stricken vessel paving the way for her re-floatation and salvage off Goa coast and smooth transfer of the 2,800 MT of Naptha on board.The on-site salvage intervention of LOTS on the Vessel at Goa anchorage, in collaboration with MMBV, under a fresh initiative of the Ministry of Shipping, Government of India, and the Government / Port authorities of Goa, was for about 3 weeks.

By 26th/27th of November 2019, containers, Inert Gas Generator (IGG) plant, Generators, Compressors, Speed Boat and the other various equipment were mobilized by road by LOTS from Kochi / Mumbai at Goa.On 28th November, the Barge intended for standby/support operations arrived at WISL Jetty at Mormugao Port. All containers, IGG Plant, Hydraulic Power Pack other equipments were placed on the Barge and sea fastening was completed.

THE DUMB BARGE ARRIVES WHERE M.T. NU SHI NALINI WAS GROUNDED IN GOA

On the very next day, the Barge shifted alongside the Vessel at Donapaula - grounded area, mooring activities completed. By 1st December, the commissioning of Compressor, HPP and the IGG Plant was done and the equipment was made standby for the operation.

During 2nd to 11th December, the MMBV team was supported by LOTS-India's equipment for the inerting / pressurization of the tanks, and the diving team assisted with the speed boat, for the eventual re-floatation of the Vessel from the grounded position. By 12th December, by means of towing arrangements, the Vessel was pulled out from the grounded position and vessel shifted to Berth No. 8 at Mormugao Port.

M.T. NU SHI NALINI IN THE BACKDROP OF GOA PORT AFTER PUMPING OUT WATER ON BOARD

13th to 20th December witnessed inerting of tanks and ventilating of the pump room and the engine room. After cargo transfer and washing of tanks was completed, inspection and certification of work completion was done by the Port authorities.

LOTS-India,together with its ship-building partner MSPL, has repeatedly proved and still continue to demonstrate that Marine Salvage Operations are not a matter of chance, but one of Expertise, Experience and Commitment.